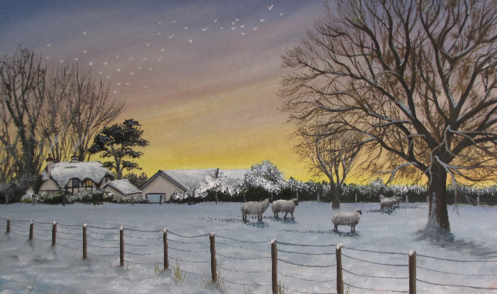 Alex McGarry is an award winning professional artist, who specialises in painting contemporary landscapes. She has been painting since she was a young girl – completing her first oil painting at

just nine years old! In her early career Alex successfully passed a National Diploma in 3D Design, following which she worked as an Interior Designer for three years. During this time she produced all the paintings for new show homes for an international building developer.

In 2008 and as a direct result of her success, Alexandra launched a career as a full time artist and began exhibiting her work around the UK. She is a member of several art societies including the prestigious Marwell International Wildlife Art Society (MIWAS). In 2009, Alexandra’s painting ‘Horses in the Snow’ won the public vote for ‘Best in Show’ at the Mottisfont Abbey exhibition from among 200 exhibited paintings.

In May 2010 Alexandra took up residency for six months at the Weyhill Design Centre near Andover in Hampshire. At the end of 2013 Alex became the editor for the Marwell International Wildlife Art Society’s biannual magazine. Currently she works from her studio at home producing paintings for exhibitions and galleries.

We accept all major credit cards.

Transactions are performed via a SSL server to ensure your privacy.